Have you ever wondered makes glow-in-the-dark paint work? Fluorescent and phosphorescent paints are used in a wide range of applications, ranging from entertainment venues to theaters. Without the proper background knowledge, you may struggle to pick the right paint or achieve your desired results. We’ve got the rundown on every type of glow paint, as well as the best possible applications for each. Glow paint has been around since the early 1990s. Since then, it has gone through many changes and been used in a wide range of applications.

Any item that is painted in phosphorescent paint must be ‘charged’ before it can glow.

In other words, the object must be placed in direct natural or artificial light for a significant amount of time. The typically charging time for phosphorescent paint is 12 hours. Most phosphorescent paints remain visible for up to 12 hours after they have been exposed to light. They will usually fade before they stop working altogether. 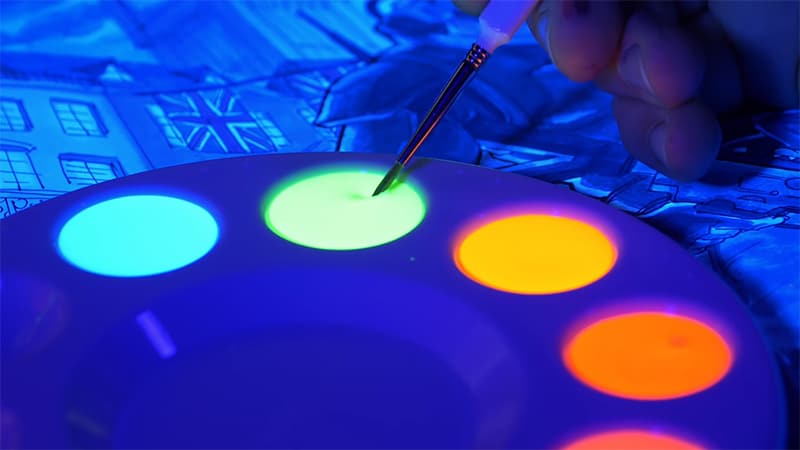 Many next-generation manufacturers are switching over to a chemical compound called strontium aluminate. Strontium aluminate is typically combined with europium to create phosphorescent emissions. Europium is a rare-earth metal.

Manufacturers claim that Europium is cable of glowing for as long as 30 hours on a single charge.

This combination tends to produce even more vivid, long-lasting emissions than that of zinc sulfide and copper. Studies show that it is roughly 10 times as bright and lasting as the zinc sulfide alternatives.

Paints that contain strontium aluminate and europium tend to produce green and aqua-blue light. They usually dry clear so that they are completely neutral in daylight.

Most glow-in-the-dark paints also contain luminescent phosphors. These compounds make the paints more visible to human eyes. Green phosphors are what give most glow-in-the-dark products their signature coloration. However, zinc sulfate can also be combined with silver to create a bright blue glow.

Other popular glow-in-dark paints are made from a combination of copper and zinc sulfate. These formulas are particularly interesting because they can be used to make electroluminescent phosphor. Check out this video to see how one woman uses electricity to light up ordinary glow-in-the-dark spray paint.

If you want a quick and readily available example of luminescent phosphors, take a look at your television or computer screen when it is off. The screens on these devices contain phosphors that are illuminated when they are struck by electrons. Such screens may appear to glow even minutes or hours after they have been turned off. This is because the phosphors in the screens retain some energy.

Do you how we said that phosphorescent paints need to be charged? The same goes for the phosphors in televisions and computers. One way to demonstrate this phenomenon is to block some of the incoming electrons.

You can do this by holding your hand or another object up to a phosphorescent object, such as a television screen or glow-in-the-dark object. Expose the phosphorescent object to light. Turn off the lights. You should be able to see the silhouette of the object you were using to block the electrons.

How Are Glow-in-the-Dark Paints Used?

Most of today’s glow-in-the-dark spray paints can be used outdoors. However, you may need to use several coats of paint as well as a clear cover coat to prevent it from becoming worn or weathered.

Why are Glow-in-the-Dark Paints Green?

You might be wondering by most glow-in-the-dark paints and materials are green. For one, the color green has a spooky connotation. This makes it perfect for Halloween decor and the likes. Moreover, neon green is easily distinguished by the human eye.

Let’s not forget the fact that zinc sulfide is inexpensive, readily available, and non-toxic.

This white, powdery mineral generates a naturally green glow whenever it is exposed to light. It is one of the most widely used active ingredients in glow-in-the-dark paints. 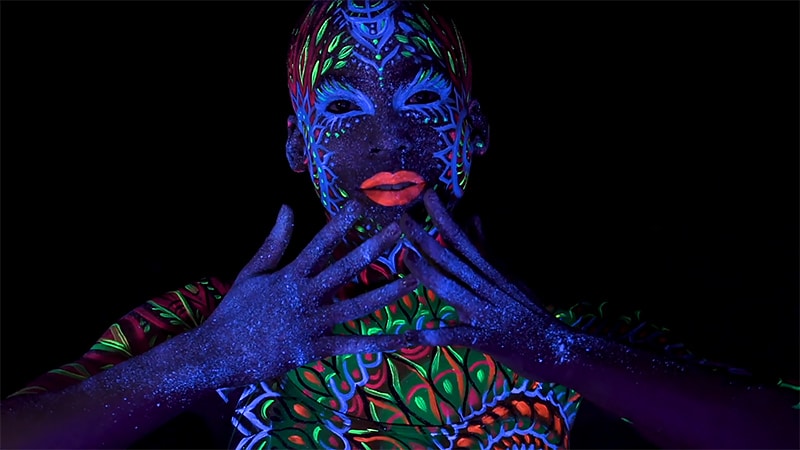 Since zinc sulfide is 100% nontoxic, it is often added to body and hair products to create wearable glow-in-the-dark paints. Like most other glow-in-the-dark products, Zinc sulfide body and face paints need to be charged before use. They usually last 4 to 8 hours. They sometimes leave behind a faint glow.

The pigments in fluorescent paints are particularly reactive to light on the UV spectrum.

Black light paint is just another name for fluorescent paint, which, as you now know, is specifically designed to work under Uv light. These paints contain pigments that respond well to ultraviolet lights. White and fluorescent pigments respond best to light on the UV spectrum. As such, most black light paints are available in green, yellow, orange, and pink. 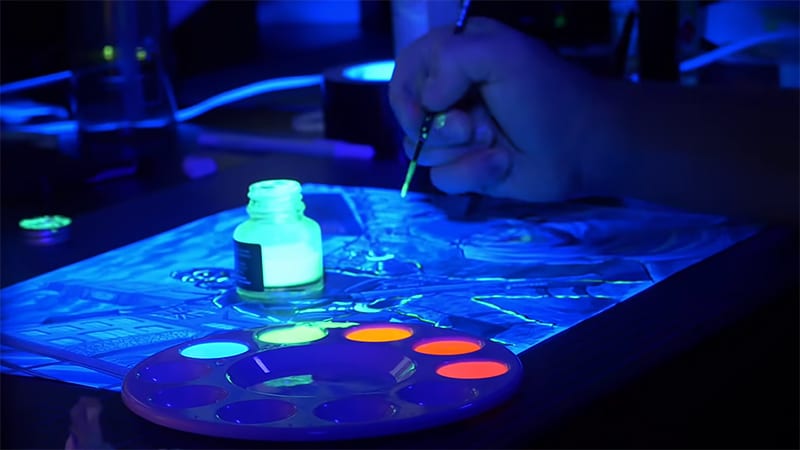 UV-reactive paints can be applied just like regular acrylic paints. Most experts recommend that you apply a white primer before you brush on your final design. It’s also a good idea to apply multiple coats. This is because most acrylic paints are semi-transparent. UV light has an easier job of bouncing off of paints when the colors are opaque.

UV paint can be applied directly over regular images. This technique is often employed to reveal secret messages and symbols or transform entire sections of an image into something new. The difference between a UV paint-embellished image under UV and regular lighting is as dramatic as day and night.

Many artists use a mix of black light and traditional acrylic paints to create images that appear to be on a grayscale under regular light but are colorful under UV lighting. Here’s one guide to shows you how to create transition grays with UV-reactive paints. 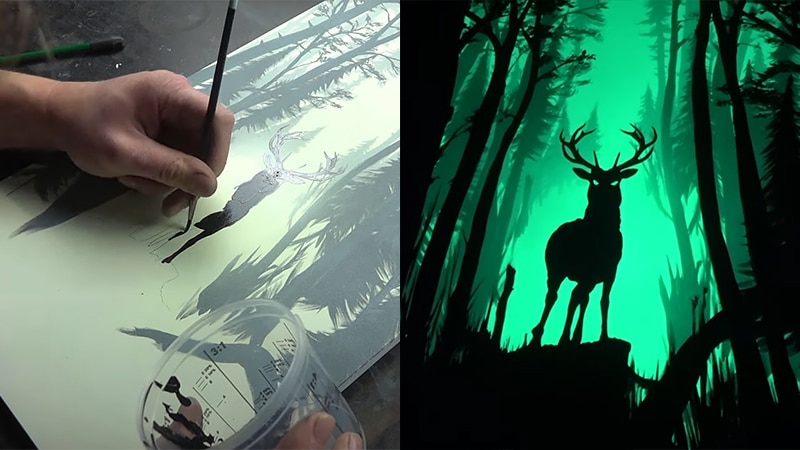 Strengthen the Visibility of Black Light Paint in Daylight

You can add fluorescent paint to similarly colored acrylic paint to give it a stronger appearance in daylight. We strongly recommend that you mix and apply such paints under UV lighting. This way, you can be sure that the traditional pigments do not have an undesirable appearance once the backlights are turned on.

Keep in mind that most fluorescent paints show best when they are applied over grayscale images.

Why Do Only Some Pigments Glow in UV Lighting?

Other Types of Paints That Glow

Radioluminescent, or luminous, paint gives off light. These paints contain small amounts of radioactive isotopes and radioluminescent phosphors. Unlike photoluminescent paints, they do not need to be charged.

They will continue to glow until the phosphor degrades, which is usually several years after their application.

Once radium was deemed unsafe, most manufacturers switched over to promethium. While this metal is safer than radium, it does not last long. Thus, manufacturers have turned to tritium. This type of radioluminescent paint is used to illuminate watches, aircraft dials, compasses, sights, and more.

What Type of Glow Paint Should You Be Using? 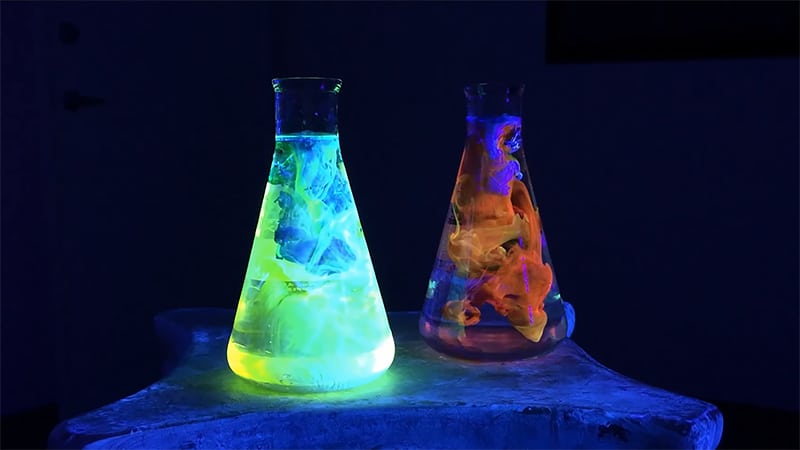 Now that you have a solid understanding of the different types of glow paints, you’re probably wondering which one you should be using and why.

Phosphorescent paint can be used to enhance all sorts of projects. It is readily available in spray and liquid forms. We recommend this sort of paint for anyone looking to add glow-in-the-dark details to an object. Most phosphorescent paints do not contain pigments. As such, they appear neutral in daylight. Since phosphorescent materials require nothing more than natural or artificial light for activation, they can be used in just about any setting.

UV-reactive paints are a bit more cumbersome. After all, they require the presence of UV light for activation. With that said, these paints come in a variety of hues. Not to mention the fact that fluorescent paints can be mixed with conventional paints. As such, they are our preferred selection for purely artistic ventures, including indoor murals, paints, and room decor.

Keep in mind that pigments have different energy levels. Therefore, some fluorescent colors appear brighter, more vivid than others.

Researchers have already concluded that yellow-green is the most vivid fluorescent color.

As such, this color is often used for high-visibility safety apparel and gear. This is followed closely by aqua. Check out The Realm of Color for a complete list of neon colors.

We had so much fun discussing glow-in-the-dark colors! Drop any of your remaining questions or comments in the section below, and we’ll be sure to get back to you ASAP! 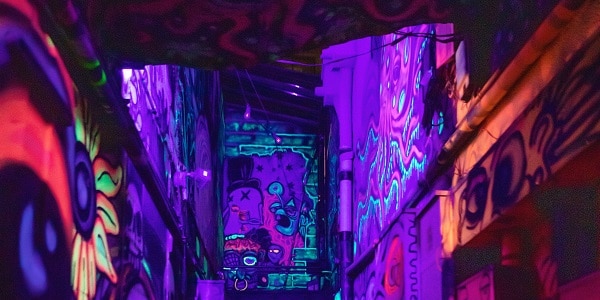 No More Worrying, Here is What to Wear to a Glow in the Dark Party 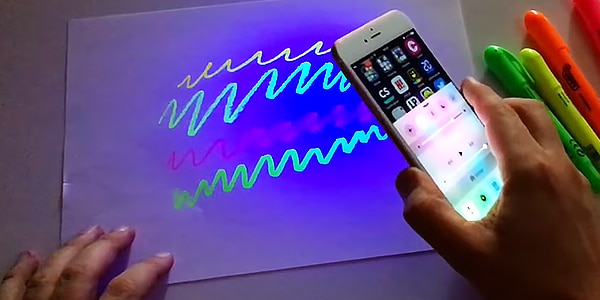 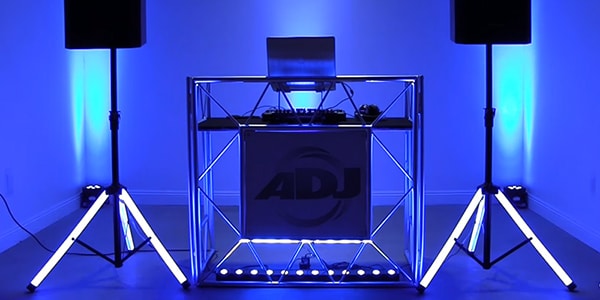